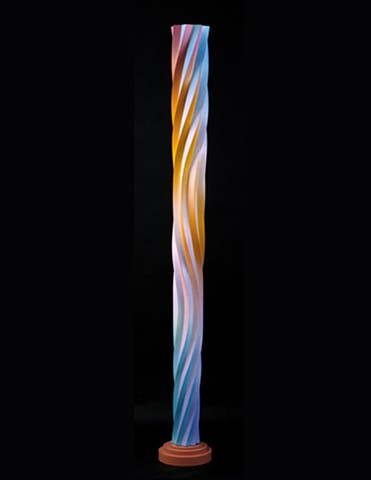 Optical Illusions Exhibition review, Eastern Washington University Ann M. Colford, "The Pacific Northwest Inlander", April 3, 2003 “Op Art soared to public awareness in 1965 with the exhibition, "The Responsive Eye," at the Musuem of Modern Art in New York, and Celentano's Lavender Creed was part of that seminal project. Many Op Art images became subsumed in the pop psychedelic of the 1960s, and the movement faded from the main stage almost as quickly as it arrived. But Celentano and a handful of others continued to explore color and light and visual response. Moving to Seattle in the late '60s, he began his long career at the University of Washington, while still advancing his artistic investigations. During the 1980s, he added the third dimension to his work with his first series of columns. "I was curious about how I could transfer the tension I had gotten in color - whether contrast or harmony - to three dimensions while also working with the vertical format," he says. "I got the idea for a column that twisted in space. I was fascinated by achieving that spiraling movement."